AMERICA UNDER GERONTOCRATIC RULE
—December 7, 2020
Joe Biden is 78, Nancy Pelosi is 80, Chuck Schumer is 70. Are they the right political leaders to tackle climate change, an issue that probably won’t effect them directly anymore?
Groene – Gerontocracy (Dutch)

THE SEARCHING AMERICAN — October 28, 2020
He is curious and pragmatic, and is barely interested in partisan politics or ideology. No wonder The Joe Rogan Experience is America’s most popular podcast.
De Groene – Profile Joe Rogan (Dutch)

IM WALLERSTEIN — SEPTEMBER 18, 2019
To study global capitalism, the sociologist Immanuel Wallerstein invented the ‘world-systems analysis.’ His years in Africa changed his global outlook: “The story of the 20st century is the ongoing fight against Western rule.”
Groene – Obituary Wallerstein (Dutch)

A DYSFUNCTIONAL SYSTEM MUDDLES ON
— November 14, 2018
Midterms: the Democrats won the House, but not the Senate. What now? A weak and ineffective president will very likely keep setting the tone.
Groene – Post midterms commentary (Dutch) 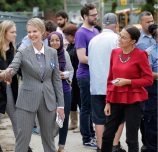 SOCIALISM REDUX — October 3, 2018
Socialism is making a comeback in American political life. Who are these new socialists and what do they want for their country? “The electoral proces is just one portion of our work. We are building a new world.”
Groene – Reportage DSA (Dutch)

AUTHORITY MADE OF INK
— September 26, 2018
The Constitution makes structural change practically impossible in the US, yet the document from 1788 retains its almost holy status. “It’s bizarre to wonder what men from the 18th century would have thought in our time—and obey the outcome of that thought process.”
Groene – US Constitution (Dutch)

“THEY WANT TO NORMALIZE FACISM”
— February 14, 2018
The American anti-facist movement (‘Antifa’) and its supposed violence is a gift to the extreme right, its critics say. But Antifa activists in the Bay Area note that the national presence of the alt-right is fading. “Preemptive self defense works.”
Groene – Antifa in Berkeley (Dutch)

“UTOPISM IS IN THE AIR” — November 8, 2017
Everything Naomi Klein has ever written seems to be meant for this moment in time. “Trump isn’t the crisis,” she says. ‘He is a symptom. We need to understand the underlying trends that made his rise possible.”
Groene – Interview Naomi Klein (Dutch)

ISLAND AMERICA — June 7, 2017
America is getting more and more isolated from the rest of the liberal world, a development that has sped up under Trump. What does this inward look do with the country?
Groene – America’s Isolation (Dutch)

ALWAYS AT WAR — April 19, 2017
Donald Trump’s “America First” nationalism turns out not to be at odds with militarily intervening in other soeverein states. What is left of the tradition of American isolationism?
Groene – American Isolationism (Dutch)

BETWEEN PRESIDENTIAL LIES AND FAKE NEWS
— February 8, 2017
Donald Trump is at war with the media. What’s American journalism to do? “Stick to reality, which is bizarre enough.”
Groene – Journalism under Trump (Dutch)

SLOUCHING TOWARDS THE END
— January 18, 2017
Is Donald Trump the last convulsion of the Reagan era? Even if so, to many the prospect of a president Trump and Republican parliamentary majorities is no less frightening.
Groene – Trump & GOP agenda (Dutch)

“WE HAVE TO BECOME THE PEOPLE IN POWER OURSELVES”
— December 14, 2016
Since the presidential election, American activists are gearing up to protest, resist and to “do more,” knowing that old-fashioned street protests won’t cut it.
Groene – Activism post-election (Dutch)

RAGE, MOURN, ORGANIZE — November 11, 2016
As Trump prepares to head a shaky coalition of populists and conservatives, the Democrats should do some serious soul-searching. “Transgender bathrooms are important, but most Americans primarily have economic worries.”
Groene – Post-election commentary (Dutch)

AMERICA’S INVERTED TOTALITARIANISM
— November 2, 2016
Extreme inequality, mass incarceration, gun violence, permanent war. These are just some realities of American life that the majority of the people condones. This apathy is remarkably in line with Sheldon Wolin’s ideas about democracy and totalitarianism.
Groene – Essay inverted totalitarianism (Dutch)

“AMERICA IS ALREADY GREAT” — May 11, 2016
In his new book, Listen, Liberal, Thomas Frank convincingly argues what many of us already know: the Democratic Party is no longer “the Party of the People” and has turned its back to the lower classes.
Groene – Frank (Dutch)

THE RADICAL INSURGENCY WITHIN THE GOP
— February 15, 2016
Whether it will be Donald Trump or Ted Cruz, Republican voters seem determined to nominate an anti establishment populist for the presidency. What does this mean for the party?
Groene – GOP (Dutch)

WHAT IS WRONG WITH MORE EQUALITY?
— February 2, 2016
The secret of Bernie Sanders’ unexpected success might be this: he is simply expressing the will of many, many people. And he is saying the exact same things as he was forty years ago.
Groene – Bernie Sanders (Dutch)

THE DONALD TRUMP SPECTACLE — August 18, 2015
Donald Trump’s main credential for the presidency reads: I am rich. His campaign exposes, intendedly or not, the many weaknesses of the American electoral process.
Groene – Trump (Dutch)

BETTING ON THE MILLENNIALS — February 18, 2015
After 35 years of Reaganism and Clintonism, American progressives long for a new Progressive Era. But is the country ready? “Our political system is in deadlock.”
Groene – Progressive Era? (Dutch)

HEROINE OF THE LEFT — January 23, 2015
A portrait of Elizabeth Warren, on whom many American progressives put their hopes during these seemingly conservative times. “The game is rigged, but I’m fighting back!”
De Correspondent – Elizabeth Warren (Dutch)

AT THE SYSTEMIC EDGE — June 18, 2014
The pathologies of global capitalism can no longer be understood in terms of poverty, inequality and injustice, argues the sociologist Saskia Sassen. In her new book she looks at ‘expulsions’—from professional livelihood, living space, and the biosphere.
Groene – Interview Saskia Sassen (PDF, Dutch)

THE PARADOX OF OBAMACARE
— November 27, 2013
The disastrous implementation of the Affordable Care Act is causing Americans to distrust their government even more. Yet there are reasons for conservatives to embrace the new law, some argue.
Groene – Analysis of Obamacare (PDF, Dutch)

MARXIST ANALYSIS FOR AMERICA — October 9, 2013
The socialist magazine Jacobin aims to revitalize the American Left with articles that are both practical and radical. At the same time it seeks the dialogue with “class-struggle” liberals. Take notice.
Groene – Jacobin Magazine (PDF, Dutch)

REBELS WITH A CAUSE — October 9, 2013
The Republicans in the House of Representatives seem willing to go all the way to obstruct a health care law that will most likely remain the law of the land no matter what. Why?
Groene – Analysis Government Shutdown (PDF, Dutch)

AMERICA HAS NO LEFT — November 7, 2012
Obama’s reelection has prompted talk about the return of liberalism as the dominant ideology. Voters, however, may have concluded that both liberalism and conservatism don’t have all that much to offer.
Groene – Commentary on Elections 2012 (PDF, Dutch)

ACTIVISM AS LAST RESORT — October 25, 2012
Structural change of the political and economic system will not come through the electoral process. For that, large-scale activism is needed, as was last seen during the Civil Rights Movement.
Groene – Essay on Activism in the US (PDF, Dutch)

THE CONSERVATIVE’S REACTIONARY MIND
— January 26, 2012
Corey Robin’s new book, The Reactionary Mind, argues that conservatism is a reaction against movements of the left—from the French Revolution to feminism. Mark Lilla thinks that’s too simple.
Groene – Every Zealot Can Be a Candidate (PDF, Dutch)

“NIXON WAS OUR LAST TRULY LIBERAL PRESIDENT”
— March 16, 2011
The American system isn’t working anymore because the liberal class—press, academia, labor, the Democratic Party—has let us down, says Chris Hedges. The nation has entered an era of moral nihilism, where corporate interests reign.
Groene – The Death of the Liberal Class (PDF, Dutch)

COMMONERS KNOW BETTER — February 24, 2011
Conservatives in the US warn against the well-educated elites, who don’t know the ‘real America’ and are therefor not fit to lead the country. Are they right?
Groene – Elites (PDF, Dutch)

THE SILENCE AFTER TUCSON — January 20, 2011
Just a week after the deadly shootings in Arizona, the debate about gun violence in the US is already stalling—stuck in the same old arguments. So the killing will continue.
Groene – Gun Control Debate (PDF, Dutch)

TIME FOR INTELLECTUAL REVOLUTION – May 20, 2010
In the West, social-democracy has already achieved its goals, argues Fareed Zakaria. That doesn’t imply that he doesn’t see a role for it anymore.
Groene – Interview Zakaria (PDF, Dutch)

FROGS IN BOILING WATER — February 11, 2010
The Tea Party movement has held its first national convention. Sarah Palin gave the keynote speech: “This party that we call the Tea Party, this movement, as I say, is the future of politics in America.”
Groene – Reportage Tea Party Convention (PDF, Dutch)

OBAMA’S BITTER PILL — July 27, 2009
While Washington is bickering about reforming the health care system, a team of volunteers flies all over the country to provide medical care to Americans in remote areas.
Groene – Remote Area Medical (Dutch)

“EVEN AT THIS ALTITUDE WOMEN CAN BREATHE”
— March 1, 2007
The just installed, first female Speaker of the House, Nancy Pelosi, tells that she too devoted the first part of her career to home and family.
Süddeutsche Zeitung – Interview Pelosi (German)